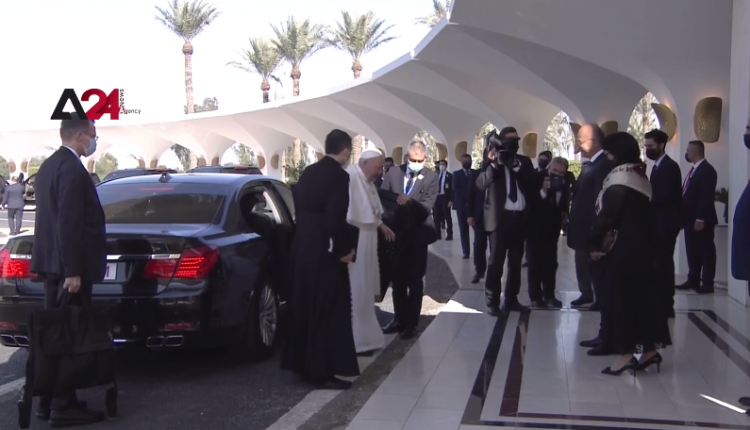 Pope Francis left Iraq on Monday after a historical 3-day visit to Iraq. During his visit, he called upon all Iraqi factions to collaborate for the sake of the public welfare, indicating that even though he is heading back to his home-town Roma but Iraq will remain in his heart. Upon his arrival at Bagdad in the international airport, he was received by the Iraqi Prime Minister, Mustafa Al-Kadhimi. In Qasr Baghdad, the Pope met the president, Barham Salih. The Poe then paid field visits to a number of churches including Sayedat al-najat in Karrada and Mar Yousef (St Joseph) in Baghdad where he held religious rituals. On Saturday, the Pope met the top Shiite cleric -Ayatollah Ali al-Sistani in Najaf followed by a trip to Ur in Dhi Qar, where a unified prayer was made for all religions. During the third day of his visit, he went to Erbil, where he was received by Kurdistan Region President, Nechirvan Barzani and the leader of Iraq’s Kurdistan Democratic Party Masoud Barzani in Erbil airport. This was made after he prayed in Nineveh in Housh Al Baia Church in ancient Mosul to commemorate the souls of the war victims. Upon arriving at Qaraqosh village, the Pope delivered the Angelus address in the Immaculate Church which was ravaged by ISIS. In Franso Hariri Football Stadium in Irbil, at least 10 thousand people gathered for the Pope’s visit.

Iraq – On the International Women’s Day, Organizations honor the victims of the Siwan Cemetery of Unknown Women