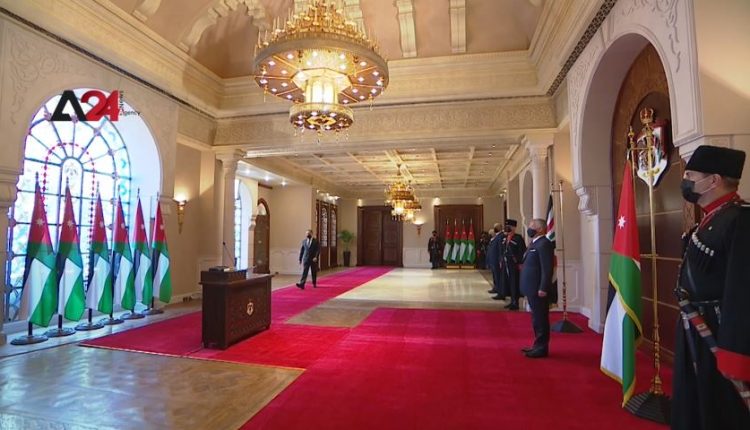 The King of Jordan, Abdullah II, approved the cabinet reshuffle proposed by the current prime minister, Bishr Al-Khasawneh, that included 10 ministerial portfolios; The Ministry of Culture, Transport, Water and Irrigation, Agriculture, Labor, Education, and Higher Education and Scientific Research. The new ministers, in the al-Khasawneh government, have sworn in before the Jordanian King, Abdullah II, on Sunday. King Abdullah expressed his thanks to the resigned ministers at Basman Palace, for their efforts in taking over their ministerial portfolios, meanwhile, the Prime Minister, Bishr Al-Khasawneh, and Chief of the Royal Hashemite Court, Yusef Hassan Al-Essawi, have attended the swearing in. It is noteworthy that King Abdullah had named Bishr Al-Khasawneh to form the cabinet on October 7th, 2020, replacing the cabinet of Omar Razzaz, whose resignation was approved by the king on the 3rd of the same month.

When you download this material, you are entitled to use it with ARAB24 logo within 3 months from the date of downloading it without using it commercially / renting it / re-selling / re-publishing / distributing it / without the written permission of ARAB24, the exclusive owner of the material.
Contact Our Sales Department for Video Without our Logo: Newsdesk@a24na.com
24
Share FacebookTwitterGoogle+ReddItWhatsAppPinterestEmailTelegramLINEViberPrintLinkedin