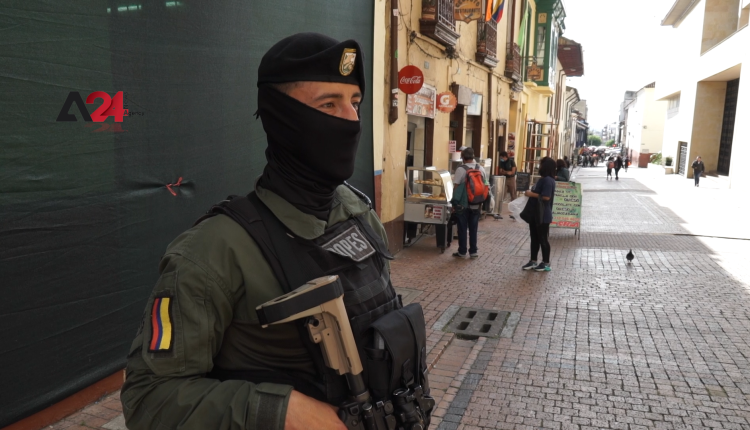 People commended the special security measures in the Colombian capital, Bogota, to put an end to violence, ahead of the presidential elections due to be held on May 29th.

As Guerillas of the Revolutionary Armed Forces of Colombia were responsible for most the violence across the country, authorities took decisions to close parks at night, ban motorcyclists from carrying a male passenger and deploy police forces in the street.

While the electoral campaigns take over the streets of Bogota, the citizens expressed gratitude for the deployment of police forces in the city’s center, even though people are aware of the real dimension of the conflict.

A Bogota citizen hailed the mitigation measures but he said authorities must act more to prevent acts of robberies and murders.

On the other hand, another resident said there will not be much improvement unless the government addressed the unemployment issue which is the main reason behind the violence that rigged the country.

Bogotá, a city of 8 million people, currently has a police force of 18,000 men and women and the government promised to increase the number to 22,000 the year end.

“It was a great measure and, well, an agreement that was made together with the Mayor’s Office of Bogota to be able to mitigate a little this phenomenon (of violence) that has been seen over several years. It is not just from this time, but has occurred for many years now.”

“Nowadays, many citizens have become aware of the violence and we inform when we see something suspicious. Now it can be recorded with the phone in a discreet way and it is communicated to the police force.”

“Yes (there will be change)… if we all help with the measures… Some measures because there are others that are kind of illogical. If we help with the security measures it will reduce a little… a little, not much (the insecurity). At least we are going to know that there are more good people trying to do things well, than people who go out to do evil. Right?”.

“Insecurity is so profound that the mitigation measures have been good but they do not compensate for what the criminals already had invaded us with robberies and murders. There is still a long way to go.”

“Well, to a large extent it can improve (security), but as I say: ‘the one who is bad acts badly anywhere, with a motorcycle, without a motorcycle, in a taxi, in a car, in whatever’. So the key matter is unemployment, because people get involved in crime for that reason… because there is no work. So in our country the poor are getting poorer and the rich are getting richer. That is the problem , that there are no job opportunities”.

Colombia- Colombians to vote in presidential elections amid high security.